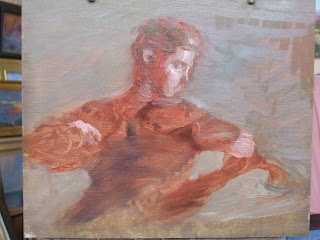 Here is my start.  I wiped my first attempt out and flipped the canvas to do a horizontal for the second attempt.  This was probably 20 minutes.  Frank Mason always said that you put down everything you know in about 20 minutes, and in many ways that is true.  My initial lay-in hit the pose I wanted as Jeremiah played song after song.  It was interesting to note that watching him play and trying to get the gesture was better than when he "froze".  The pose, then, became very stagnant and less interesting.  Alla prima painting is sort of like gesture drawing...actually it is gesture painting, which is drawing with the brush at its best.
Posted by Karen Winslow at 8:02 PM

This is fabulous Karen! The drawing and lighting are wonderful and the action is perfection. The hands float beautifully, I can hear the music. Bravo!