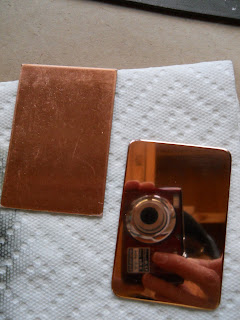 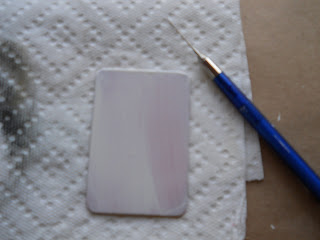 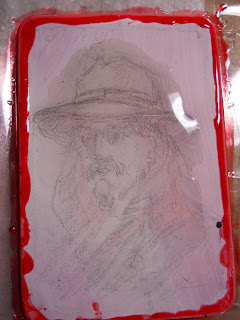 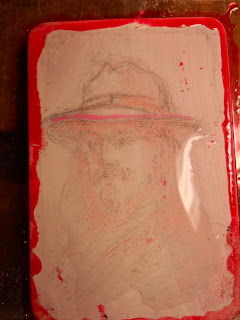 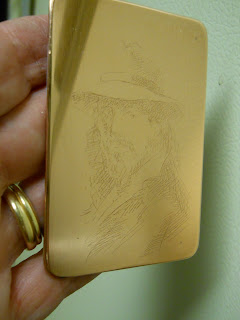 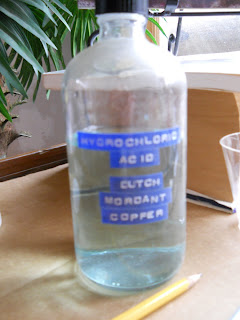 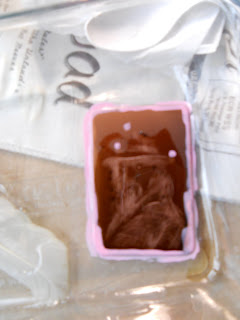 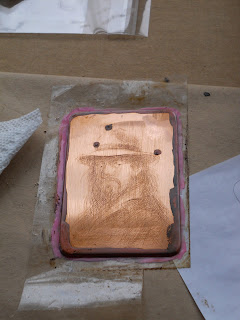 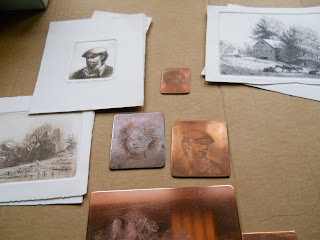 In addition to painting and drawing, I etch. Etching is the process of making pictures on a metal plate by the corrosive action of an acid. To "etch" literally means to "bite".
An acid resistant ground usually containing beeswax and rosin is carefully applied to a polished copper plate. Where the artist draws, the ground is removed exposing the copper. When the acid is applied to the plate, the acid "bites" or corrodes the exposed metal, leaving lines or furrows. The longer the acid remains on the exposed copper, the deeper the furrow or lines, and the deeper the line the darker the line will appear when the plate is printed.
Etchings can go through many "states" or stages, where lines are added, subtracted, or strengthened. This requires varying the exposure time to the acid, by stopping-out lines that have been sufficiently bitten, redrawing and making corrections. A plate may be re-ground, re-worked and re-bitten many times. Also, parts can be removed by scraping and burnishing the plate with special tools.
The photos above show a plain copper plate and one that has been sanded and polished. The edges of the plate have been filed smooth and rounded, so that when the plate is pulled through the press it will not cut the blankets. I am using a sewing needle that is inserted into a pencil holder as my scriber. The back of the plate has been covered with tape, and stop-out varnish is painted around the edges. I decided not to place the plate in a bath of acid, but rather pour a small amount of acid on the plate and feather is around. I discovered that nail polish was a much better stop-out varnish, because it dried faster than the regular commercial stop-out.
When I removed the ground, I held the plate up to white refrigerator so I could see the image. The following day, I reground the plate with universal liquid hard ground and continued to draw, and then exposed these new lines to the acid. The new lines show up as light pink. When this ground was removed, I rubbed a little oil paint into the lines so that I could see the image. I will probably pull a few prints to see how this looks. The image, when it is printed will be in reverse.
The last photo shows some plates and prints. All of the the plates are copper, and some are tarnished, but you can the the images a little better. I am still working on some of these. When I am satisfied with my images, I will pull some prints.
Posted by Karen Winslow at 4:52 PM