Painting Kids from Life...going back a few years 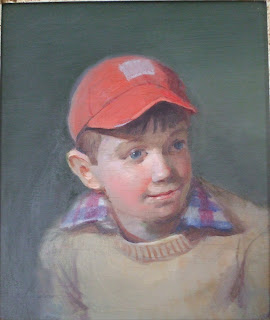 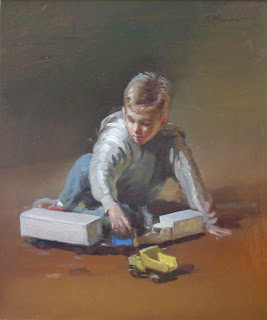 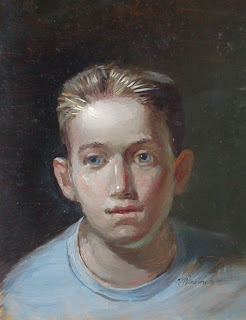 Dan is 28 years old now. Here are a few paintings of him that were done in the studio from life, when he was between 4 years old and about 12 years old. These are small, fast, studies in oil, and all of them are on panels. I wish I had painted more. I am sorting the paintings of my kids into individual portraits, plein air studies and interiors.
Posted by Karen Winslow at 11:02 AM 2 comments:

Painting Kids from Life ... a few years ago 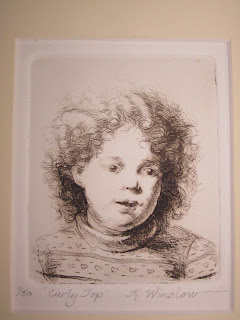 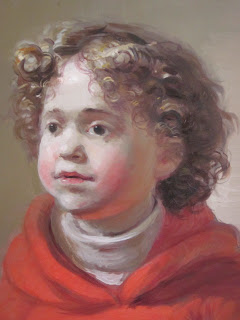 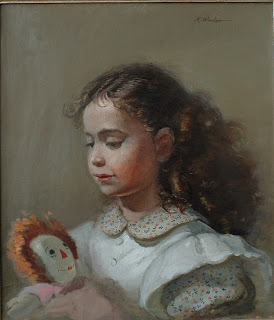 Elisabeth is now 30 years old. She is my second oldest child, and she posed for a number of paintings. These are a few of her that were more specific "portraits". Again, they were painted from life. The bottom one was painted the same year I painted Rebekah with a doll (see below). Lizzie, though, was the only child to pose for an etching.
To do the etching, I did a small fountain pen drawing of her from life. The drawing then became the basis for the etching, which is small, and I think I went through about 5 or 6 "states", or stages, to get to this image. Generally, I print small editions like this. You can see the plate for this etching a few posts down. It is copper, and I used a "Dutch Mordant" to bite the lines. The printed image, as you can see, comes out in reverse.
Posted by Karen Winslow at 11:02 AM 2 comments:

Painting Kids from Life...going back a few years 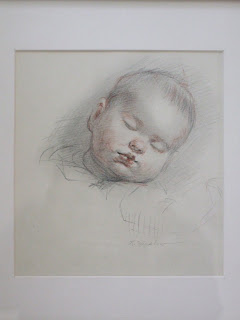 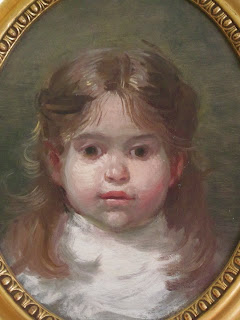 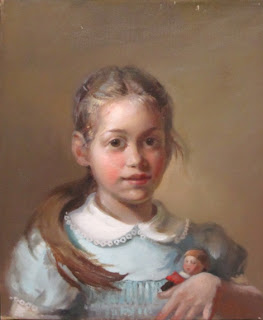 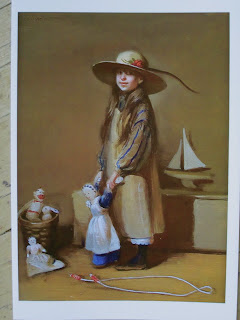 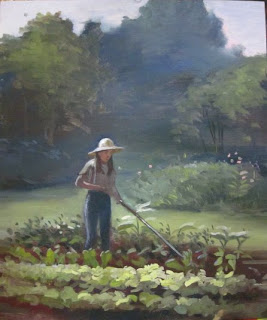 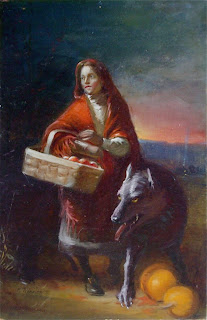 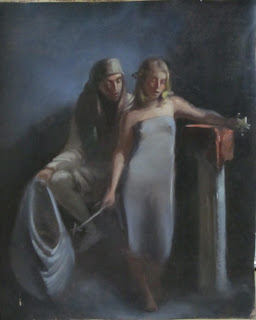 My oldest daughter is 32 years old now. I've painted and drawn her many times. Some of the paintings were specific "portraits", and some were more generic studies. The top drawing was done of her while she slept, when she was 2 months old. Sleeping kids are easy to draw or paint...because they are not moving around and you can actually study the form and light. This drawing is in pencil with conte and fountain pen.
The oval picture was painted when Becky was around 27 months old. It is an oil on paper, and she posed in the studio. It is a one-shot alla prima, which is the most you can hope for with a young child who is moving around (unless, of course, you use photos). But, painting from life is so much better with depth and subtle nuances that are missing in copying a flat photo. This painting is obviously an example of a specific "portrait".
The third picture down is another example of a specific "portrait" of Rebekah at around 5 or 6 years old. It is a 14"x16" oil on linen, and she posed for this one in the studio. I painted a picture of Elisabeth, my second child, the same year. They both posed holding dolls, and both paintings are the same size. Having a child hold something makes a nice portrait.
The fourth picture down is a notecard of the painting. The actual painting sold years ago at a 2 person show that Jack and I did at the Southern VT Art Center. Often I regret selling a painting...not that I regret selling paintings..but some paintings should be kept. This is one of them. This was painted from life in the studio. Rebekah is 11 years old here, and a very good model. The painting was 18"x12" oil on linen.
When the kids were small, I painted plein air studies of them in the yard. Here is one with Rebekah in the garden. This is a one-shot painting and it is a more generic study using the figure as a "prop" to the whole scene. Rebekah was probably around 13 years old in this one. It is a 12"x14" oil on panel.
"Red Riding Hood" was painted in the studio when Rebekah was in high school. She originally posed wearing a russet shawl, but I decided to glaze some red on this, and the idea took off from there. I added the wolf and transformed the background with grandma's cottage in the background (smoke going up from the chimney) and the dark woods and threatening sky to set the mood. This one is 18"x12" oil on panel. Keeping your ideas open makes being an artist such fun. I didn't start out with the idea of painting Red Riding Hood when I had Becky pose, but it morphed into this idea with a simple glaze.
"Sleep and the Sandman" was a one day start. Rebekah posed with Michael (friend) in the studio. The characters took shape on the spot. I will probably play with this one and finish it up.
Make the most of every day. Kids grow up fast! Paint!
Posted by Karen Winslow at 7:37 AM 6 comments: 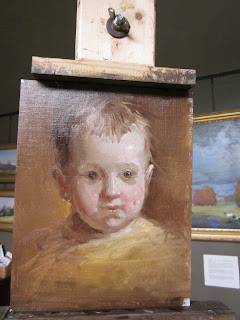 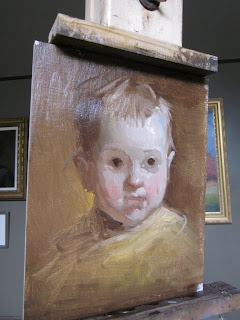 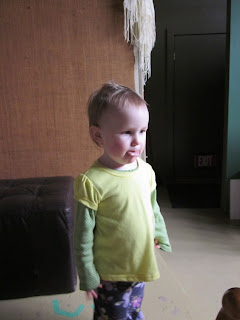 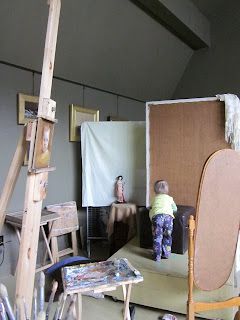 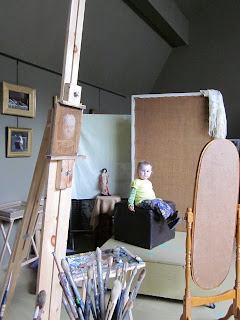 I had to babysit for my granddaughter, Claire, so I thought I'd try to see if I could paint her. Claire is 25 months old. I set up a mirror so that she could see herself, which sometimes keeps her looking in the direction I want. I tried rewarding her with a pretzel...but as you can see....she was up and down from the seat, and she definitely had her opinions on modeling. :D The top photo is about as far as I could go, but I want to work on this one a little bit more, too.
Posted by Karen Winslow at 6:15 PM 2 comments: 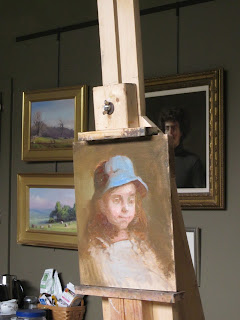 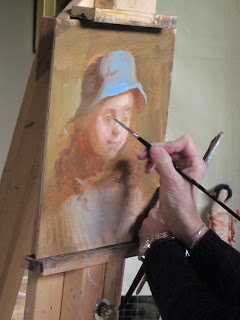 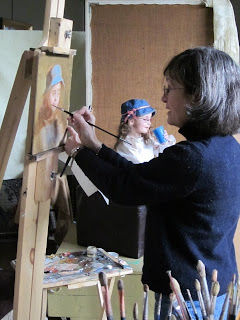 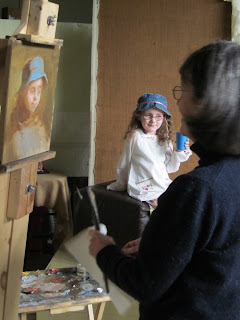 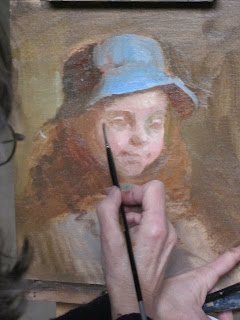 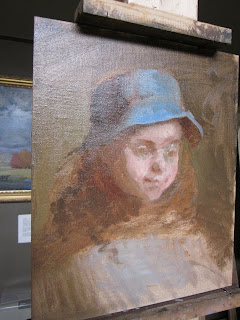 I painted my kids as often as a could get them to pose. I always worked from life, so most of my paintings were small, fast, alla prima studies. My kids are now grown, and I am now painting my grandkids. Violet Pepper posed for about 35 minutes on Thursday. Here are a few photos. As you can see, posing is not really posing. Kids move. They wiggle. But if I can get her to look in a general direction once in a while, I can concentrate on the light and shade. Mostly, we talk and laugh. The top photo is as far as I got, before she had to go to the dentist. Hopefully, I will be able to continue this one, because it was a fun start.
Posted by Karen Winslow at 5:52 PM No comments: