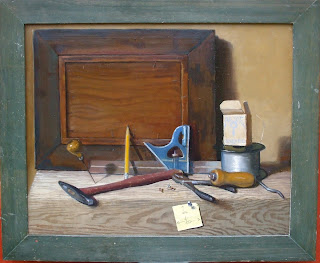 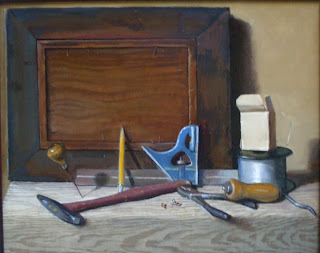 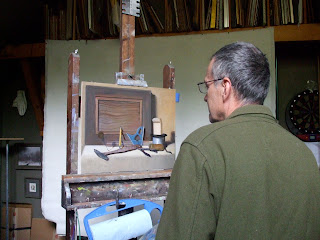 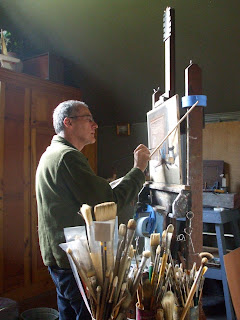 Recently, My husband Jack asked me to retrieve one of his paintings ("Framing") from one of the galleries that shows our work, because he wanted to make some changes. He had been thinking about them for a while. The painting was actually started in September 2008, right before he started painting the large vertical landscape. Both this still life, "Framing" and the "By the Upper Brewster" first hung in Southern Vermont Art Center in June 2009.
I looked through some old photos to see if I had any showing Jack working on this still life, as well as a photo of how the painting did look before the recent changes. I did. So, I hope that you find this interesting.
After thinking about this painting for some time, he decided that it needed a little "something", and I think his additions are fabulous.
The top photo shows the painting the way it looks now, with the addition of the sticky note and label on the box of screw eyes. The photo under that shows the way the painting looked previously. It was framed originally in a black frame, and now it has a plain, weather-beaten green one. The photo under that shows the start, and the one below that shows him painting, where you can see a glimpse of the set-up.
Posted by Karen Winslow at 9:26 AM