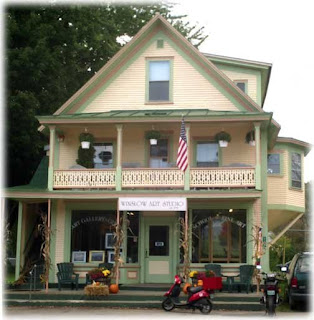 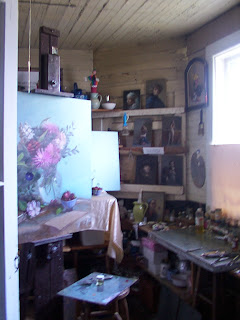 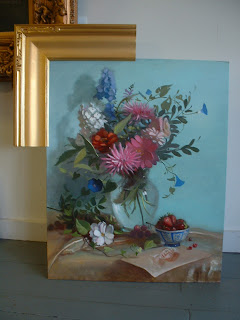 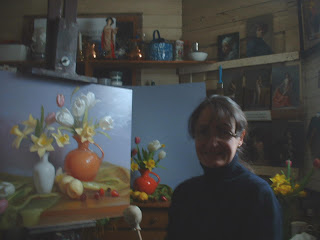 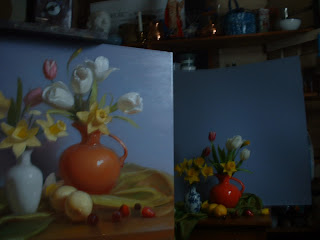 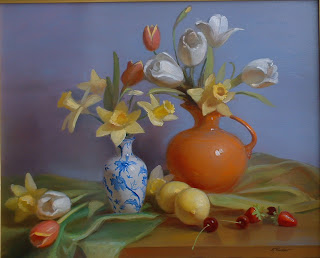 From 2001-2007, I rented a storefront on Main Street in Jeffersonville, VT, which occupied the entire downstairs area of the building. It was my studio/gallery where I painted from life, taught classes and sold my paintings (and my husband's and a few fellow artist's paintings). My storefront was one of 4 galleries that were located on the road, but I was the only one that was an Open Studio/Gallery that was open year round.
Although I painted throughout the store, most of my paintings were done in a tiny, unheated back room, that had acted as a storeroom for the stores, and at one point, post office that had previously occupied this storefront. This back room had shelves all around and a north-facing window. I blocked off the bottom section of this window with foamcore, so that my light could come in at a slight angle. All of my props were stored on the open shelves, and I often used the shelves themselves for my still life table. If I wanted to do a larger painting, I had to set up a table (and sometimes a small dresser which contained more props and draperies).
The room was very small, and it was impossible to step back far enough to get a picture of the painting and the set-up together. To analyze my paintings (because I usually step back to check my painting as I paint) I began using a reducing glass, which gave me the effect of stepping way back. In the first picture which shows the room, my painting in progress, and a bit of the set-up, you can see part of the door on the left. In that photo, you can also see the ceiling, which was made of wooden slats. If it rained for more than 2 days, water would begin to drip along the slats onto me, my work, my props, etc., and I would have bowls, buckets and various containers catching the water that plopped around me as I painted. The longer it rained, the further in the rain would come along the slats. My other concern (besides water) was that the paint chips rained down. I had the suspicion that they were lead chips.
I painted here almost every day, and anyone could come in and watch. Customers were usually surprised to find an artist actually painting from life, and it was a great teaching opportunity.
The 2 paintings that are shown in this post were 24"x30" (top painting) and 20"x24" (bottom painting), and these were about as large as I could go. Both of these paintings sold at the storefront.
Posted by Karen Winslow at 4:08 PM