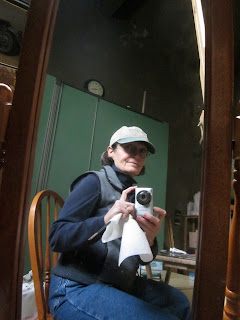 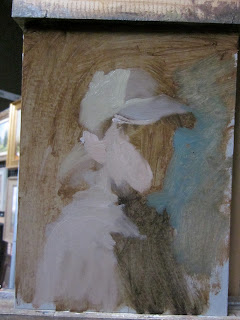 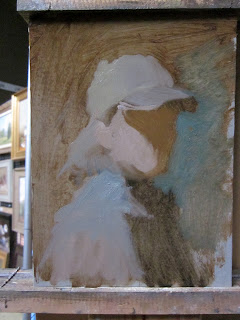 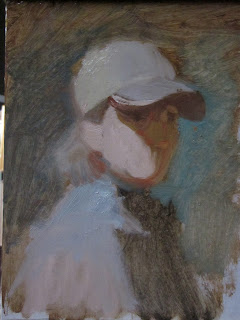 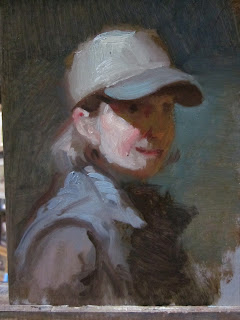 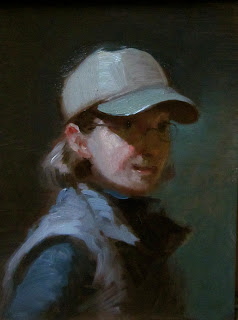 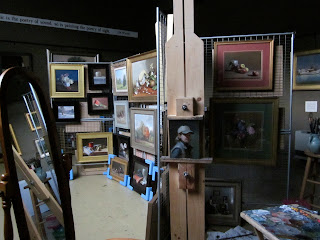 There are 2 basics ways to approach painting.  One is to do a careful drawing in line and then proceed to fill this in with paint, which is a slow, indirect approach.   The other is to paint a relationship of lights to shadows by massing, without starting with a finished drawing, and this is faster (the artist is drawing and painting simutaneously, or drawing with the brush).   Massing is working for a general "Light Effect".  Maintaining the integrity of the masses, or holding the mass of light in relationship to the mass of shadow,  is what creates an illusion of light.

When I had the Open Studio, I painted a couple of little head studies, and I decided to do a self-portrait, too.  I photographed the process, which gives a visual explanation of massing.  I took the top photo looking into a mirror, however, if I took the photo at the correct angle....the camera would have covered my face.  But, you get the idea.  I normally stand when I paint, but I sat for this one.  You can see my palette in the bottom photo.  As usual, I have my grayscale.  The portable walls with the paintings is from the December 3rd hanging for the Open Studio.  This was changed for the December 10th sale.

I began the head study with a basic umber shadow mass, then I massed the lights which included the side of my face, vest, hair and hat.  My 2 main masses that had to be protected were the shadow created by the brim of the hat across the front plane of my face and the mass of light, which included the side plane of my face.  The light hitting the green wall was a little lighter than the shadow plane.  With each pass, I tried to model a little bit of the features, but I subdued anything that might break up my mass.  The power of the illusion is in keeping a strong shadow mass to light mass relationship.

This tiny painting was done very quickly, and it holds together as a unified light effect.  Painting in mass allows the artist to make changes, developing the piece from general shapes to more specific details, and works well if you are under a time constraint.
Posted by Karen Winslow at 9:16 AM