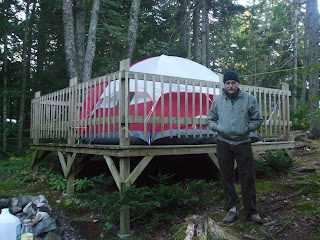 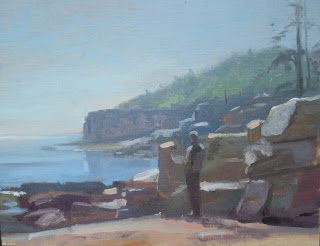 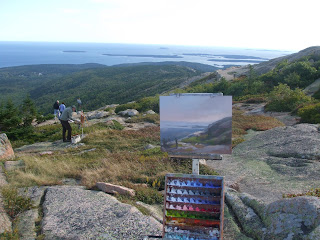 September 15, Jack & I drove to Acadia National Park on Mount Desert Island in Maine, which is about an 8 hour drive from Vermont, to do a little ocean painting. We camped out 2 nights, one in the pouring rain, but we did manage to do a couple of plein air sketches before driving back on September 17. We would have stayed longer, but I had hired a model for the Open Figure/Portrait session (which we host twice a month).
Cadillac Mountain is accessible by car and has numerous walking paths around the summit for a spectacular view of the water and surrounding areas. We hiked out along the path and set up our equipment. It was really windy and cold, which meant hanging on to the easel and paper towels, so they wouldn't blow away. To my amazement, they were tons of tourists who kept stopping by to say hello and take our pictures.
Here are my 2 sketches, along with a shot of our campsite in Bass Harbor. The top photo is of Jack by the tent. We were the only tenters at this time of the year, so we got a prime site with a platform (good for when it rains...and it did...quite a bit). The second photo is the sketch I did by Otter Cliffs in Acadia. The figure in the painting is Jack. It is a 10"x12" oil on linen. The bottom photo is from the top of Cadillac Mountain, and my sketch is 11"x14" and is also an oil on linen. Both of these sketches were done on site on Thursday.
Posted by Karen Winslow at 5:00 AM

When you show your working palette in your photos, I always try to get a closer look. Sometime, can you explain your palette organization? You've written about the 'key' or 'pitch' of a painting-can you elaborate on that? Is it as basic as e.g. if the light is cool and blue, then everything in the light should have a litle blue in it? Thanks!

Hello Judy. Thank you for your question. My landscape palette is set up with a series of tonal values running from light to dark, and I mix them for my blues, grays, violets, greens and pinks. I also have a shelf of earth colors and and shelf with palette scrapings (which are incredibly handy). This gives me lots of possibilites, and it allows me to paint very quickly.

When I talk about pitch or key, I am referring to values, any more importantly how one value is relative to another value. Because our eyes see a greater range of values than we can actually reproduce with our paints, we must learn to use our limited values to create a relative light effect. In other words, how dark to I have to go to make some "read" as light.

I love your paintings, especially the one from the top of Cadillac Mountain.