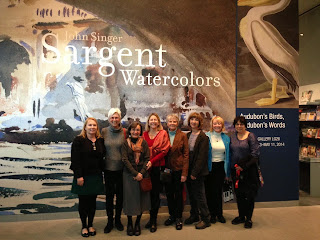 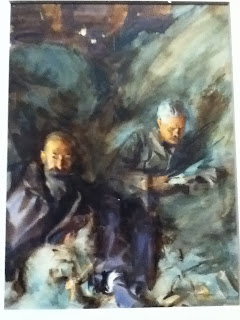 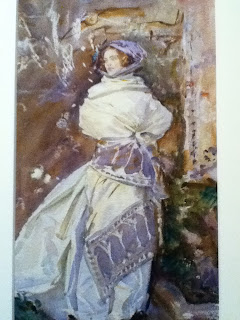 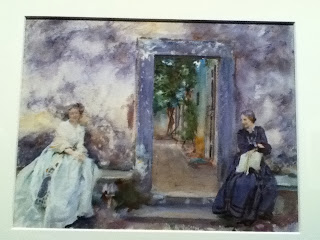 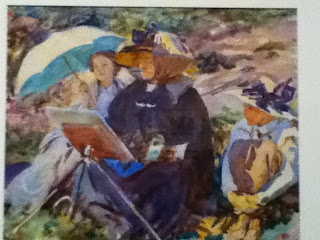 In December, I went down to the Museum of Fine Art in Boston to see the Sargent Watercolor Exhibit.  The exhibit showed over 100 paintings from the combined collections of the Brooklyn Museum and the  MFA in Boston.  The works were from many years, and they did not disappoint!  Painted primarily for his own enjoyment, they give us a view into his private life - studies of friends and family on outings and hikes in the country, or plein air paintings from trips.

Contrary to what many modern watercolorists believe, John Singer Sargent was not overly concerned with preserving the white of the paper, and he used white paint when needed.   Sargent used a combination of transparent and opaque watercolors (gouache)  to create his dazzling light effects.  The opaque watercolor, or white gouache, was used both under and over transparent washes to hold his lights or build stronger planes of light.  In addition to the gouache, he experimented with wax resist, which could hold a light, and when painted over, the resist could produce interesting textures.  In the second painting down, you can see some of the wax resist to the left of the figure.  In the last photo down, I love the woman on the right, where the sunlight and shadow on her legs are so simply rendered, yet so effective.  Sargent was wonderful at contrasting warm sunny areas with cool areas in the shadows in his plein air studies. 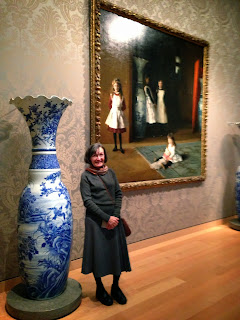 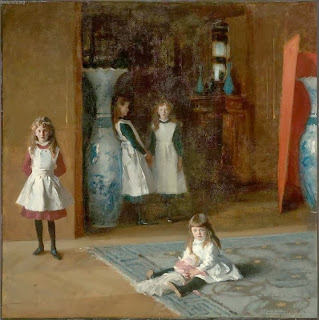 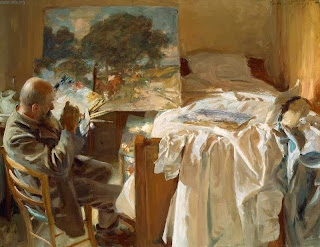 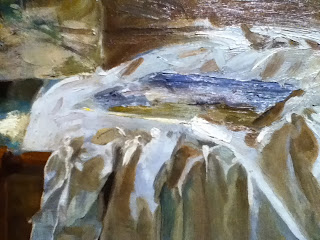 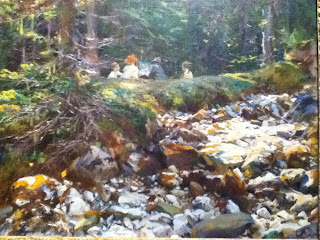 In addition to the many watercolors in this exhibit, there were some of oil paintings, too.  It was a delight to see the one with the artist in his "bedroom studio".  I took a close-up of the sheets.  Sargent used a full brush and depicted strong planes of light with thick paint, painting with knowledge and conviction.  The sheets are a wonderful study in massing.  In the plein air painting, the sunlight smashing onto the rocks in the stream bed and the dappled sunlight on the bank and trees was very convincing. I wish I had taken a regular camera, instead of my ipod (sorry, the photos are grainy and washed out).

Aside from the actual watercolor exhibit, the MFA Boston has one of my favorite Sargent paintings, The Daughters of Edward Boit.  It is exhibited along with the giant vases that are in the painting.  Here is a picture of me next to a vase to give you a sense of scale.

This is just a tiny sample of the show, and I would recommend seeing it before the exhibit closes on January 20, 2014.  The MFA Boston is a lovely museum with a fine collection.  The American wing shows a number of excellent 19th century paintings by the Boston greats:  Tarbell, Paxton, Hunt, and Benson, along with numerous Hudson River paintings.  Get inspired!
Posted by Karen Winslow at 4:32 PM