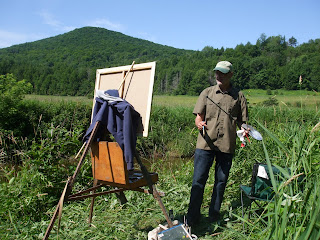 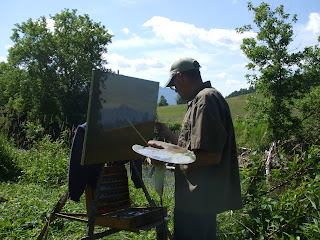 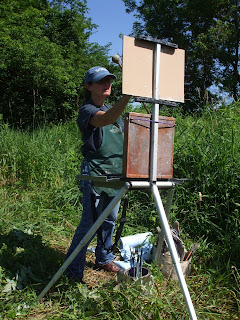 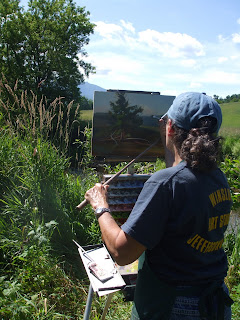 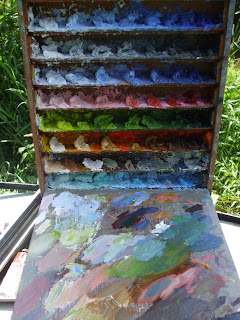 We got out early this morning, and Jack took me to a place that he had painted in early spring.  The weeds were over my head, but we managed to get to the little brook with the view of Mt. Mansfield, the highest mountain in Vermont.  The space was pretty limited.  Jack had a large canvas, so he took his "big" easel.
This easel was owned by Thomas Curtin, who was a friend of my sister-in-law, and was an artist who had lived in Cambridge, VT.  He had passed away in 1977.  Before he died, he gave the easel to my sister-in-law to give to us.  It is a Gloucester easel manufactured by Oscar Anderson, and it is a very ingenious invention.  It is very simple, and Jack's paintbox and landscape palette fits nicely on the v-shape in the middle.  The canvas is sits on pegs, and the top of the canvas is held by a stick.
Jack is working on linen with an oil priming, and it is 24"x30".  He will go back several times to the same spot to finish the piece.  This was just the start.
I am working on a small gessoed panel, and instead of getting in the big mountain, I decided to concentrate on the bank just across the brook.  You can see that my landscape palette box is held onto my easel by a small bungie...works great!
Here is a close-up of my palette box.  I need to fix it up a bit now.  When I mix a fresh palette, I can keep it in the freezer, and this will keep the paint from drying out.
Posted by Karen Winslow at 2:47 PM

jeff said...
This comment has been removed by the author.
3:12 PM

Great post Karen.
It's nice to see your palette box.
It's kind of like mine except I have seven shelves.

That Anderson easel is a collectors item. Worth almost $400 I was bidding for one on EBay and I stopped after it went over $250.

It went for $395 or something near that.

There is a company called Take-It easel who are now making them.
http://www.takeiteasel.com/index.html

They are expensive but seem very well made.

Also Jerrys Artorama is selling a cheaper version called the Beauport
which is selling for $119 right now. http://www.jerrysartarama.com/discount-art-supplies/Easels/Travel-and-Outdoor-Easels/Beauport-Large-Format-Outdoor-Easel.htm

It does not look as well made as the Take it easels.

It's great that you guys are posting pictures of yourselves painting as it's good to see your setups. The work looks great as well.

Hi Jeff. I thought that it would be useful. Jack made my plaette box years ago to fit my half box French easel. You can see where I just changed my pink row, and where my pure cadmium row used to be. I suppose it would have been wiser to take paint remover and completely clean off the old paint first, so there would not be strange values and colors underneath. The row with the weird colors is my "soup". At the end of every painting session, I mix everything together...neat colors! Karen

Karen, found your post while searching for info on my Oscar Anderson easel which I picked up at an antique mall. I bought it to start my first painting ever, well aside from my paint by number when I was a child. Little did I know what I was buying but now realizing who Oscar Anderson is, needless to say this is exciting with the new discoveries. I saw in your post you have an O.A. easel as well. Any more information on these? What year were they last manufactured? I would appreciate any information you have as stated bone this is very exciting. Love you blog!