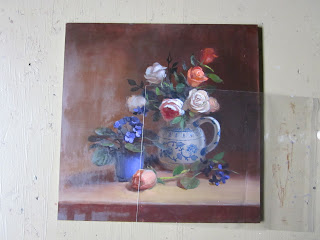 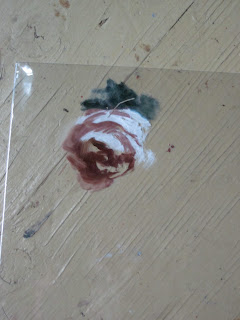 Very often, when I work on a painting, I will let it rest.  That means it sits unframed and leaning against the wall of the studio so I can think about it.  Something really bothered me about this painting, which was painted from life (like always).  I finally decided that the two main flowers were just too similar...they were about the same size and the faced the same direction, vying for attention.

In the seventies, I was a fashion illustrator for several pattern companies in NYC.  If you did any home sewing back then, chances are you might have seen one of my illustrations.  They were nothing like my paintings or drawings today, but were mostly in pen, watercolor or charcoal and very stylized.   Anyhow, doing an illustration involved turning in a preliminary "sketch" for approval, which was then returned to me with "corrections".  The "corrections" were on a piece of tracing paper place over my original drawing, and I would then do another illustration, a "final" incorporating the corrections.  Because I do not own Photoshop or something that could help me visualize what I wanted to do, I decided to try something similar to the pattern company "corrections".  Tracing paper was too murky, so I used acetate, which is clear and I could paint on it, but it would not bleed onto the painting.

Karen, I love this idea and the look of the post. Linked to it.

In earlier post, really enjoyed reading "star-bugs" story of your "Catch a Falling Star" painting and note card. Fireflies, lightning bugs, star-bugs...call them what you will, they are phosphorescent, luminescent, magical creatures that inspire a sense of wonder in children of every age!

All the note cards are lovely. In this "idea" post, I liked how you used a former illustration technique... clever, truly.